The second half of the 20th and the beginning of the 21st centuries mark the third and the beginning of the fourth technical revolutions, which have changed the socio-economic and household conditions of humans, and have an unambiguous impact on the health, physical and mental capacities of all persons, especially children and teenagers. Hence, there is a growing demand for scientific studies that would help to answer the main question – how can young and elderly people be motivated to change their lifestyle seeking to ensure physical activity? This is especially significant when exploring the motivation, value-based orientations and provisions of children and teenagers. The problem is formulated as a question – how can the lack of physical activity, which is particularly significant for a growing organism in childhood, adolesce and mature age, be compensated?

According to the research conducted by Raskilas (2011), boys play computer games 18.8 hours on average per week in Lithuania. The results of our research comply with the findings of the aforesaid author. Most learners spend 2–3 hours per day in front of the computer or TV; however, the time spent in front of the TV or computer increases with age. This may be conditioned by the abundance of information on the internet and learning load related to the tasks of other school subjects. Strukčinskienė et al. (2011) maintains that approximately 16.5% of school boys walk outside for more than an hour a day. 40.6% of the boys walk outside for more than half an hour per day. More than a third of the respondents (33.3%) walk outside for less than 15 minutes per day. Pano and Marcola’s (2011) research findings reveal that the main reason preventing from sports is the lack of time. 59% of the respondents claim having no time for doing sports. The authors indicate another important reason that prevents 14–18-year-old boys from doing sports, namely the shortage of nearby sport centres. Such a tendency is also confirmed by our research. The research carried out by Smalinskaitė (2002), which aims at revealing the reasons that prevent the cultivation of different sport branches, demonstrates that the learners’ attitude to sports has the greatest impact, since the majority of the repondents (18.8% of boys, and 32.7% of girls) claim having no desire to do sports. Besides, they do not have enough time (6.6% of boys and 18.1% of girls). The current research reveals that the majority of teenagers (boys) believe that they are relatively physically active and nothing prevents them from being active. However, a number of reasons are revealed that prevent the teenagers from physical activity and confirm the findings of other authors’ studies. They include laziness, lack of time, lack of concreteness in parents’ approach to sports, the belief that learners are not physically fit enough, as well as health problems.

Smalinskaitė (2002) also reveals why learners cultivate a selected branch of sports, i.e. the motifs for their sport activity. It appears that the main motifs why the learners undertake sports include their willingness to develop character (18.7%), as well as health promotion and care of appearance (18.2% of all the respondents). Pano and Marcola’s (2012) research demonstrates that 41.29% of the respondents do sports as they wish to improve their physical appearance, whereas 27.31% claim that they want to have a good time. While doing sports, teenagers also strive to improve their physical activity (23%), improve their health (24.94%), control their weight (20.86%) and stay with friends (20.64%). The results of our research confirm that the main and most important factors determining teenage boys to do sports is their willingness to stay healthy, to achieve good results in sports and to do something meaningful in their leisure time. Such reasons as willingness to be attractive, recognised and famous, as well as a wish to enter the national team are rare.

According to the results of the current research, the boys claim that their parents are glad that the children meaningfully spend their free time doing sports and believe that they can achieve good results in sports. However, a minor part of parents still claim that the physical load for their children is too big, as well as too much time is allotted to doing sports, whereas sport facilities are poor. Nevertheless, it is assumed that parents perceive the benefit and significance of sports for their children. The carried out research allows generalising the value-based provisions and attitudes of teenagers towards the reasons affecting their physical activity. The obtained results deal with the learner needs in the system of non-formal physical education, as well as reveal the necessity to further explore various motifs for physical activity and development of motivation for sports in both the system of education and family.

The analysis of the research results reveals that the learners of grades 5–10 do not have firm attitudes regarding the diversity and choice of motifs for physical activity, as well as opportunities for sport activity.

According to the learners that do sports, parents and teachers of physical training do not have a decisive impact on the choice of sport activity, which leads to the conclusion that the impact of these factors should be promoted at this age.

The analysis of the questionnaire survey results reveals the peculiarities of the period of adolescence that is influenced by the processes of growing and development. It is assumed that at this period, learner activities can be promoted by educating parents and teachers, deepening their knowledge about and competencies of teenagers’ physical education, as well as considering the peculiarities of teenagers’ biological and psychological maturation. 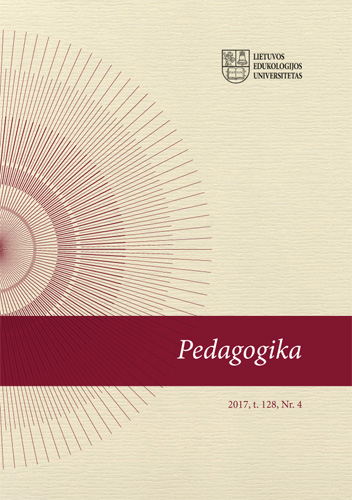